It seems to me that all theology and most ecclesiology must be built from the ground up. It should be informed by culture and church history, but it should not be formed as defense of particular traditions (or crystalized understandings) or in reaction to other groups. Sadly, the majority seems to be formed in reaction and defense. Take for example current leadership structures in the Churches of Christ. Basically they looked at churches that adhered to the "pastor system" and said "We aren't going to be like that!" In reaction, they went to the opposite extreme thereby creating a system that is abused from the oposite direction. This takes us to a point where even with our "patternist" leanings, we scoff at the Biblical example of the elders being appointed by the evangelist (Timothy) and with the evangelist apparently having at least an equal place at the table with them. We see that as horribly impractical and unrealistic (nevermind that it's Biblical). The theology and ecclesiology of our churches should be built on a search for truth and a search for how to accurately be the body of Christ in the enviornment that surrounds us. Anything else is heresy.
AE
Posted by Adam at Thursday, January 27, 2005 12 comments:

The Inadequacy of Language

I've been thinking lately about how we as human beings just don't have the ability to wrap our 3 lb. brains around God, much less explain him fully to others. It seems to me that the only ways we can even talk about God are anthropomorphically (giving human traits and characteristics to something that is not human, i.e. "the flower turned its face toward the sun" or "the skies wept"), analogically (through the use of analogy), or metaphorically. I guess that's why it bugs me when I hear people describe God with such certainty. ("God IS like this." "God couldn't possibly be/do/feel that") As Brian McLaren says, most people actually just think of God as a bigger, better version of themselves. The use of the three language devices I have listed (anthropomorphism, analogy, or metaphor) in relation to God necessarily implies that we don't or can't exactly know. When we use these devices we are, by necessity saying "it's kind of like this, but not exactly". It's a stance of humility (and one that scripture actually takes in describing God as well). It's saying "I only know what He has chosen to reveal to me, and I have to relate it to my experience in order to even begin to grasp it."
Even when Jesus explains the Kingdom of God, He speaks parabolically. We want Him to do a detailed, logical exposition. Instead, He always says "The Kingdom of God is like this: Once upon a time, there was a..." On top of that, these parables aren't even allegorical, where you can just figure out the symbolism and fill in the blanks, and it's a rare exeption when He gives any kind of explanation whatsoever. Instead, what Jesus does with parables is create worlds full of things from the experience of his listeners, only the worlds created by His stories don't quite operate the way ours does. Tom Wright says that parables are like plays looking for actors, and our job is to figure out where we fit in them. Jesus, instead of giving us steps, rules, and models for the Kingdom of God creates new ideological worlds with his stories and invites us to join the cast.
AE 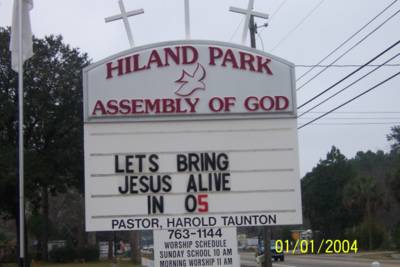 This sign and the one in the next post below are actual church signs that I took pictures of in Panama City. On this one I wanted to say "Because He's dead now? Were you just waiting for a year that rhymed with 'alive' to bring Him back?"
Posted by Adam at Thursday, January 13, 2005 1 comment: 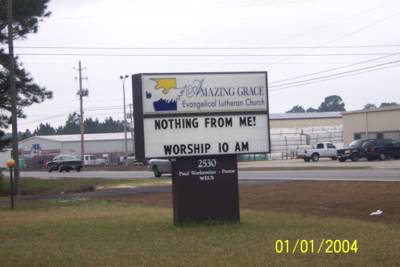 I just have no idea what they were even trying to say with this
Posted by Adam at Thursday, January 13, 2005 7 comments:

I don't beg people to follow Jesus. Some might find that to be a truly horrific statement. They may wonder what I'm doing in ministry. Before you write me off completely, let me explain. The "pleading with people to come to faith" methodology stems from a few assumtions: 1) It's all about Heaven and Hell (or at least that's the most important thing) 2) "Being a Christian" comprises of holding the right beliefs in your head (or mentally agreeing with the right ideas) 3) Morality is all Jesus is really looking for.
I buy into none of these assumptions. While Heaven and Hell are realities (though most popular understandings of them are misleading at best) they most certainly are not the point. On top of that, simply holding the right beliefs in ones head is worthless, and morality as an end unto itself is an anemic goal unworthy of the Blood of Jesus. The point is Jesus. It's living in the Way of Jesus. It's living out the mission of Jesus. It's impacting and interacting with the world the way Jesus would if he were us. I try to reveal the mission. I try to point to the Way. I try to paint the beautiful picture of the Kingdom of God...of how the world would be if we let God use us to bring his dream into reality. If they aren't interested, I'm not going to beg them. Jesus didn't. When groups of His followers left because His Way was to hard or different from what they wanted, He looked at his other disciples and said "Are you going to leave too? There's the door."

On a slightly related and slightly unrelated note, I've been thinking about church growth and numeric (attendance) goals recently. To be totally honest (que hostile responses) I think such goals may be sinful. I base that on the account of David's sin of taking a census of Isreal and things Jesus said about about the man who built bigger barns. On top of that I have a real problem when we commodify people and reduce them to numbers. It seems like we are only interested in getting more butts in our pews for the glory/continuing existence of each individual congregation. It seems to me that if we instead focused on making/being disciples (apprentices) of the Way of Jesus and focus on transforming our churches into communities of faith that motivate by inclusion (rather than exclusion), we would see true growth stemming not from programs, but as a natural product of who we are. It seems to me that if we care more about who we are (supposed to be) and less about numbers, God will be more likely to bless us with the numbers. On the other hand, if we seek numbers as an end unto themselves for the glory/continued existence of our individual congregations, God may well refuse to bless such goals. Jesus said something about "if you want to save your life you will lose it, but if you pour out your life for my sake and the sake of the Gospel, you will find it"(paraphrase mine). I wonder if that applies to churches too.
AE
Posted by Adam at Thursday, January 06, 2005 11 comments: